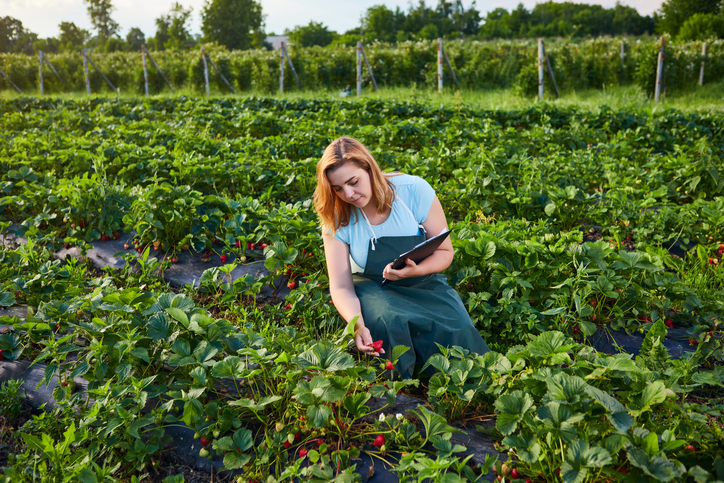 A cloud computing start-up that monitors farm productivity has raised £235,000 in Innovate UK funding, launched a recruitment app and expanded its software development team – all with help from Innovate UK EDGE.

“When I took over the farm, harvest workers would write their name on a piece of cornflake packet and stick it to the box they picked,” says David. “That’s the level of data we were gathering. Our sole metric for whether we had a good season was our bank balance.”

Using his background in cloud computing, David built a solution that would measure worker’s picking speeds, track the productivity of berry varieties and predict yield by analysing climate data.

“Supermarkets want to know what supply they can expect on a daily, weekly, seasonal basis. Before I developed my own technology, I was just guessing here.”
In December 2019, David began work with Jayne Codling, innovation and growth specialist at Innovate UK EDGE.

“I was in a bit of a fog at the time. I wasn't really clear on what we were doing, and I was a bit depressed because our MVP wasn’t performing as I wanted it to.

“But from that first meeting, Jayne has been absolutely pivotal in getting us on track and to where we are today.”

Jayne began by suggesting a fresh perspective and supported David onto Innovate UK’s Global Business Innovation Programme, including a funded visit to an international Agri-Tech conference in Melbourne, Australia.

During the visit, David changed the direction of Cropdesk completely, deciding to create a far more integrated solution that would allow farmers to monitor every aspect of production from one platform.

“I came back from Australia completely refreshed and refocused, having learned a lot and with a clear path in mind.

“I’d also identified challenges in finding good seasonal workers – a problem that was about to skyrocket in the UK as we entered the first national lockdown.”

While UK farmers were preparing for a post-Brexit slump in Eastern European labour, they weren’t prepared for COVID advancing that scenario by a year.

“The government responded with the ‘Pick for Britain’ campaign, which was brilliant at raising the profile of farmer’s labour shortages. But it also overloaded the industry with thousands of applications from people offering three hours here and there.”

“Fruit picking is a 5am start, 6 days a week, pick your arms off sort of job – so those applications weren’t particularly useful.”

David designed a prototype solution, Seasonal Jobs, which works like a dating app for farmers and workers, pairing up likely matches. Applicants need not apply to farms individually and the good ones get snapped up quickly.

To fund the project, David collaborated with Innovate UK EDGE, creating an application for Innovate UK’s Sustainable Innovation Fund. The bid was awarded £50,000.

“It would have been simply impossible without Innovate UK EDGE – they even managed to get extended impact funding, securing an extra £25,000.

“I used to work with developers in Serbia, which was a real pain point for me as I couldn’t manage them properly. But with this funding, I’ve been able to hire a team of four full time developers and four contractors, all in the UK, which is working much better.”

For David, the most valuable element of Innovate UK EDGE’s support has been the sounding board offered by his advisor, Jayne.

“Particularly in the beginning when I was a solopreneur, the ability to download what's in my head and have someone experienced say; ‘great, but think about it this way’, was absolutely invaluable.

“We’ve embraced Innovate UK EDGE with both hands. Rather than expecting them to just do things for us, we’ve collaborated to make sure that we achieve results together. I think that’s the secret of our collective success.”

The future of Cropdesk and Seasonal Jobs

From the outset, Cropdesk was designed to be scalable, operable and useful to any farm of any size in any country and in any language – and David now plans to scale the platform across the world.

Innovate UK EDGE will continue working closely with David, supporting every step of the way as this Dorset business sets its sights on going global.

It would have been simply impossible without Innovate UK EDGE."