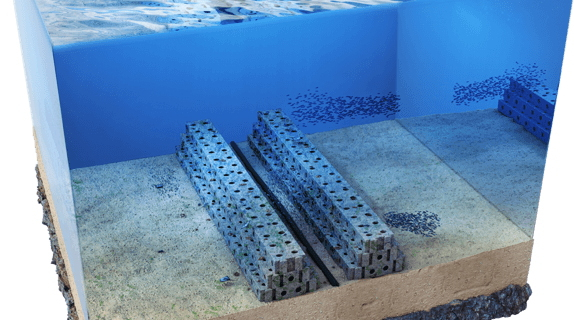 While coral reefs attract headlines, ARC Marine is focusing on flat oyster reefs which have declined by 85% globally and 95% in Europe since 1890. Decimated by overfishing and rising temperatures, these reefs are ‘ecosystem engines’, filtering sea water and providing habitats for marine life.

“Most reef restoration programmes are currently paid for by NGOs and charities,” says Tom Birbeck, CEO, ARC Marine. “We wanted to create something much more scalable, so targeted offshore oil platform and wind farm developers with an attractive proposition, both financially and ecologically.”

The company uses hollow, stackable, ‘LEGO-like’ reef cubes that protect seabed infrastructure, such as cables, and provide a surface where oysters can attach. Commercial and endangered species then have a place to hide, sleep, hunt and breed.

Unlike the ‘concrete mattresses’ currently in operation, these cubes are not classed as ‘marine litter’ and do not need to be recovered at great expense during decommissioning.

ARC Marine has potential to become the global leader in accelerating reef creation, with every offshore construction project around the world using reef cubes. But for now, Tom sees the company as at a “critical tipping point”, moving out of early-stage R&D and needing to raise finance, internationalise and reach new clients quickly, all while navigating the pandemic.

Innovate UK EDGE has been helping ARC Marine do just that. Here’s how:

China is currently constructing more offshore wind capacity than the rest of the world combined, making it a huge potential market for ARC Marine.

“The country is quite new to wind power, so we wanted to get our technology in front of their developers before they became corrupted by more traditional methods,” says Tom.
ARC Marine joined the Global Business Innovation Programme (GBIP) in 2019 and participated in a technology visit to China.

“Traveling to China isn’t something we would have been able to fund ourselves, but by securing a place on the GBIP, we not only benefited from a travel budget, but also training on the business culture, an itinerary of pitches, and introductions to the right people, which was just invaluable. You also tend to pitch alongside multinational corporations, which lends you instant credibility.”

“If you’ve never worked on IP before, it’s not easy to determine what needs protecting and where you can save money,” says Tom. “A patent lawyer will tell you to protect everything and before you know it, you’re snowed under with costs.”

Innovate UK EDGE stepped in to deliver an impartial IP audit for ARC Marine, allowing Tom and the team to identify necessary IP and licensing opportunities, project costs over the next eight years, and factor that into fund raising.

“IP is the backbone of what we’re raising investment on and we’ve secured funds that wouldn’t have been possible without this work,” says Tom.

Internationalisation is critical to ARC Marine’s growth strategy, but the pandemic has caused many overseas contracts to be placed on hold.

Rather than waiting for these to progress, Innovate UK EDGE advisor, Jayne Codling, secured a speaker slot for Tom at global maritime event, MariMatch 2020, which led to talks with offshore developers in France, a market that ARC Marine hadn’t previously considered.

“Time is the biggest commodity for an SME so having someone like Jayne who knows your business and can pick out these opportunities is just really, really useful.”

ARC Marine was successful in securing an initial £60,000 research contract, with the potential for larger R&D funding of up to £3m in SBRI Phase 2 2021.

“SBRI 1 was a lifeline in 2020. For an SME that’s on the brink of commercialisation, a six-month Covid hiatus without any income could have wiped us out.

“If we’re successful in Phase 2, that would open doors to a pilot with the world’s largest offshore wind developers; the biggest project we’ve been involved in to date. If we can knock that out the park, the future looks bright for ARC Marine.”

“In the meantime, we have a pipeline of revenue and can highlight to investors that Innovate UK sees scope in what we’re doing and are prepared to fund us.”

The future of ARC Marine

By 2024, ARC Marine aims to be turning over £15m with major contracts in China, Europe and the US.

“Innovate UK EDGE were there for us at the beginning when we were a team of two, almost acting as a third member of staff. Now we’re a team of seven and each step of the way they keep upping their game to match what we need.”

Innovate UK EDGE were there for us at the beginning when we were a team of two, almost acting as a third member of staff. Now we’re a team of seven and each step of the way they keep upping their game to match what we need.”